Who is Edsa? A Brief History Behind the Name

Mention Edsa and two things come to mind: the bloodless People Power revolution that restored democracy in 1986 (plus its more recent incarnation that ousted former President Joseph Estrada in 2001) and the unfortunate traffic jams along Edsa Avenue that bedevil Metro Manila commuters on most days. People celebrating the 29th anniversary of People Power this week might wonder about the meaning behind the name Edsa, though. Who is Edsa? What did he do? Let’s learn a bit more about the man whom arguably the most popular avenue in the country is named after.

The North and South Circumferential Road

Edsa is a 24-kilometer long avenue that stretches from Monumento in Caloocan and passes through Quezon City, Mandaluyong, Makati, and Pasay. It also encompasses the Metro Rail Transit Line 3. According to a December 4, 2011 Inquirer article by Korean War historian Art Villasanta, this highway began construction in 1939 during the time of President Manuel L. Quezon. It was then referred to as the North and South Circumferential Road. After World War II – for reasons unknown – the Americans renamed it as Highway 54.

So, how did the North and South Circumferential Road evolve into Edsa? According to another Inquirer article, this time by historian Ambeth Ocampo last April 8, 2010, when the authorities decided to look for a new name for the said highway, the Historical Institute’s E. Aguilar Cruz suggested that it be named after a historian. The historians Teodoro Agoncillo, Horacio de la Costa, and Gregorio Zaide were supposedly crossed off the list because they were still alive at the time. They then chose Epifanio de los Santos because he had already passed on by then and didn’t have a street named after him yet.

Lobbying: from Highway 54 to Edsa

The Historical Institute’s pick for a new name wasn’t a shoo-in, though. There were other noteworthy contenders too, as Villasanta’s aforementioned article mentions: Avenida 19 de Junio (in honor of the national hero’s birthday), President Ramon Magsaysay Avenue (in honor of a beloved past president), and General Douglas MacArthur Highway (in order of the American officer who helped liberate the Philippines from Japan).

Edsa, back when it was green and clean and sans flyovers and the MRT. Can you tell where this is exactly? 🙂 Image credit: Philippines, My Philippines FB page.

In 1900, he became a District Attorney and later on Provincial Secretary of Nueva Ecija. Just a couple of years later, he became Governor of Nueva Ecija. In 1906, he became Prosecuting Attorney for the provinces of Bulacan and Bataan; a year later he was reappointed as Fiscal for Bulacan. In 1918, Governor-General Francis Burton Harrison designated him Assistant Director of the Philippine Census. And these are just his achievements in government. He also has considerable achievements as a scholar, historian, philosopher, bibliophile, philologist, linguist, librarian, researcher, and philantrophist. 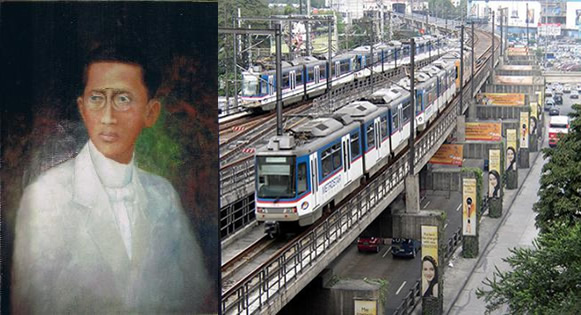 “The great among great Filipino scholars”

As a respected as a man of letters, he toured and visited libraries and museums of various European countries. The researches borne from these travels became the focal point of the Philippines’s Filipiniana collection. He was the first Filipino of native parentage to become a member of the Royal Academy of Madrid. His renown as a man of learning and erudition led to his last government position as Director of the Philippine Library and Museum on May 16, 1925. He died on April 18, 1928 after suffering a stroke.

He is not a well-known historical figure, but some of his peers consider him to be the greatest Filipino genius after Jose Rizal. This polymath is regarded as the “first Filipino academician” and “the great among great Filipino scholars.” Edsa is thus named in recognition of Don Panyong’s contributions to the nation’s intellectual and artistic heritage.

It’s refreshing to note that one of the country’s main arteries is named after a Filipino intellectual. The next time you and your friends get stuck in traffic in Edsa, maybe you can regale them with trivia about the history behind the name. It might just keep your mind off the traffic jam a wee bit. 🙂

Fireside by Kettle: Comfort Food that Warms the...

Still Using SMS?! Time to Make the Switch to a...