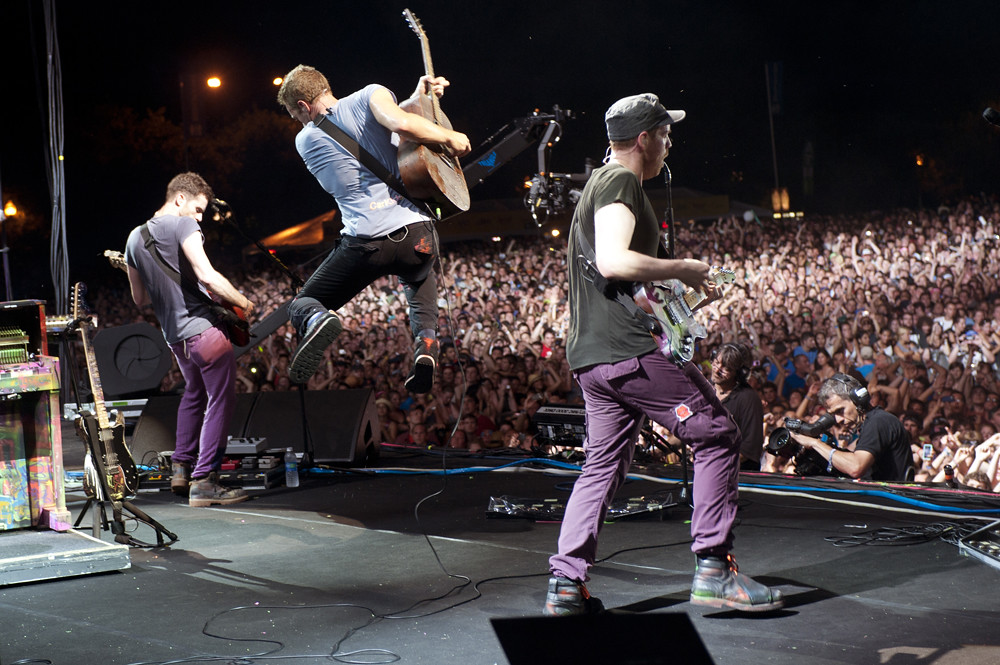 (Coldplay in concert, photo courtesy of lollapaloozafest on Flickr)

You’ve occasionally jammed to them in the car on your little trips. You’ve forever dreamed of seeing them in concert (well, I have). As the one-trick ponies come and go, they continue to rule in the quietest way possible.

English rock group Coldplay has become the staple band of the decade. Their specialty of bringing a certain style to each album is unparalleled, and their heartbreaking hits continue to capture their core audience.

To celebrate their splendidly-received sixth studio album Ghost Stories, I’ve picked out and ranked 6 of my favorite tracks from their albums and special releases. Featuring their very first hit, an EDM collaboration, and many more, here are some gems that made Coldplay the hit band they are today.

Those Christmas lights, keep shining on.

I couldn’t help but add in my guilty pleasure song as a sort-of “near the big leagues” pick. Nobody ever listens to a Christmas song in the middle of, let’s say, May. Or ever, really. They piss me off, and that’s an opinion I think I share with a lot of people. However, Coldplay defied the odds and produced a pop-centric, underrated ditty that will give you that snug, coffee-during-a-storm feeling that you love. No cheesy, bell clinging attached.

Be my mirror, my sword and shield, my missionaries in a foreign field.

A friend of mine from high school interpreted the verses as “almost satanic, possibly the storytelling of a fallen demon”. What do you think? Merging classical and pop music seemed like an impossible effort, but Coldplay did just that and to great results. Viva La Vida was the band’s first #1 hit for both the US and the UK and also was awarded “Song of the Year” by the Grammy Awards. The track proved to be a complete game-changer, with its orchestral vibe tinged with religious and historical references.

Life goes on, it gets so heavy. The wheel breaks the butterfly.

This one’s a personal perennial fave. Paradise is a perfect description of the neon-streaked Mylo Xyloto: a smooth and confident attempt at synth, without having to sound robotic. The repetitive hook showed finesse in a screaming-in-the-highest-pitch Chris Martin. The poetic verses displayed remarkable songwriting. Apparently a “would’ve-been X Factor winner’s single”, this was another step in the right direction for Coldplay.

‘Cause in a sky full of stars, I think I see you.

If Mylo Xyloto was the band dipping their toes in the water, then ‘A Sky Full of Stars’ is a full-fledged dive! Produced alongside hitmaker Avicii, the unique track combines both the group’s traditional use of keyboard and the producer’s passion for a built-up, club-rave explosion. The EDM rebranding of electronic music has gone huge in the recent years, and this is the band’s tasteful take.

I swam across, I jumped across for you.

This simple, metaphorically-titled love song is in your broken iPod shuffle, the crummy old desktop computer at home, and in your hipsteresque mixtape burnt disc from 2006. The record itself, however, never gets old. A breakthrough single spotlights a career; it’s your first impression of the artist. ‘Yellow’ was perfect for the British quartet, as it propelled them to great heights.

Lights will guide you home, and ignite your bones.

‘Fix You’, dare I say, is the unofficial soundtrack to all moments of defeat, depression, and just plain misery. It pushes anyone on the brink of tears to bawl. The tune flows freely, as a great ballad does, building up to a celebratory crescendo that will really fill you up with a pint-full of emotions. One of the most well-known songs of Coldplay, it was an ode specially written for the passing of Gwyneth Paltrow’s father, Bruce Paltrow.

No one ever said it would be this hard. Oh, take me back to the start.


Choosing amongst the wide Coldplay discography is a massive task. Being the master of depressingly good music, I believe this established the band as an icon for the new generation. It’s a haunting, piano-driven ballad crisp with falsetto, drawn from multiple layers of sadness. It’s a classic apology without ever sounding outdated, accompanied by a eclectic, reverse-motion music video. It’s a gentle strike to the heart, and a fire that could warm the coldest of souls.

For more articles on Coldplay, check these out:

Gio is a fan of tunes from the UK, mind-boggling photography, and foul humor with friends. He is currently taking up BS Business Economics in the University of the Philippines Diliman, and his usual cravings include cake and coffee. On his down time, he frequently watches Grey's Anatomy, Game of Thrones, and How to Get Away With Murder. Follow him on Twitter and Instagram. (@xvirgilio)

WIN Tickets to Shane Filan's You & Me Tour Live...