When In Manila, a roadtrip to Ilocos Norte: Philippines’ Northern-most Frontier is totally do-able and so worth it!

Cities of Vigan, Laoag and Pagudpud in Ilocos Norte, Philippines 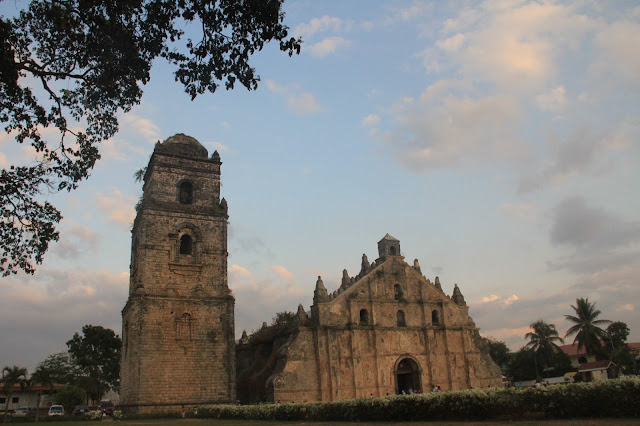 A must-do roadtrip 10 hrs away from Manila!

Economically, the cities of Vigan, Laoag and Pagudpud appear untouched by the Westernized and highly urbanized Philippines,. Ilocos Norte and Ilocos Sur area along the South China Sea was a discovery for us, though. There are several resorts and hotels in the region to attract tourism. We stayed in Laoag, so that it would be easy to commute to Vigan, as well as Pagudpud.

Check out our complete guide for Vigan here: https://www.wheninmanila.com/vigan-101-where-to-stay-what-to-do-and-where-to-eat-when-in-vigan/ 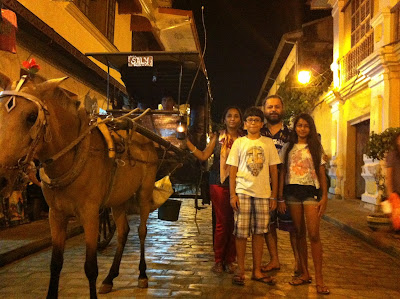 When in Manila, it is usually clean on the roads and in the malls. So, honestly, we were quite unprepared for so much dust on the leaves, litter by the wayside, and the general lack of apparent happiness in the Ilocos region. Yet Ilocos turned out to be a very rewarding roadtrip from Manila.

The 10-hour drive was completely worth it due to its difference from life in Manila. 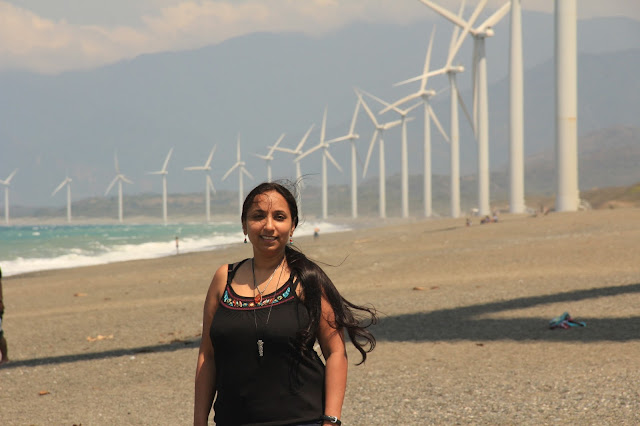 We were even more unprepared when after a long day’s drive to the north– out of nowhere– the Bangui windmills  suddenly appeared!

There they were– majestic and quietly at work– stirring the blue sky and its scant clouds in an almost arid landscape. What a sight Bangui Windmills are! Lapping ocean waves — right next to a completely hot and dry, boring landscape! I can’t get over the transformation and the difference to travelers’ mood that the visual contrast made to each of us on that roadtrip!

As if the Water and the Earth refused to talk to one another, yet lay beside each other for seasons. The population– like ignored kids– ate fried food and heavy meat not knowing how to quench the hunger for softer love. 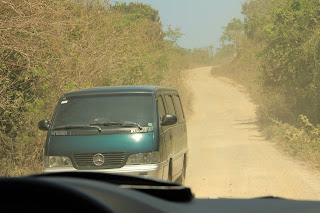 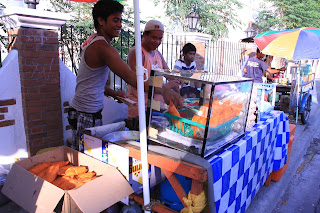 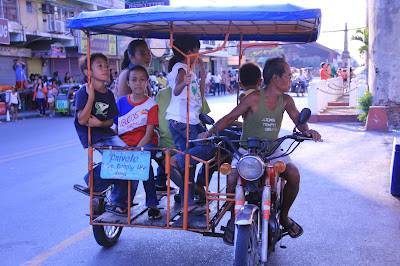 The ILOCOS side of the Philippines story appeals because it is plausible. It makes sense when you try to understand what the country is– in totality, in history and in its national evolution. There was nothing cosmetic about the ILOCOS NORTE in presentation. The reality is that Nation Building is not an easy task.

You cannot graft one culture on the stock of another and always succeed. A genuine blend of the two can do the wonder. a wonder that seems to have eluded the Ilocos. 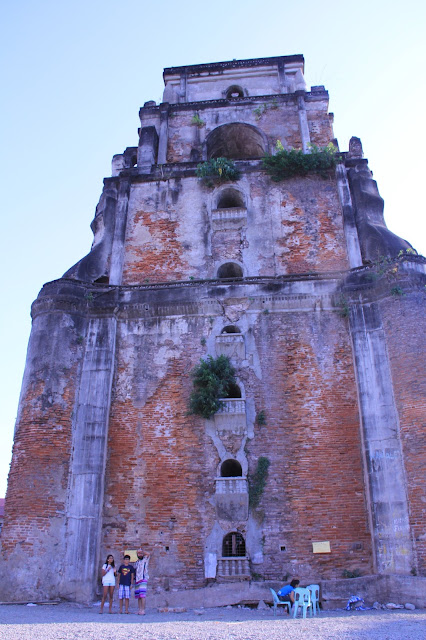 Here, of course, I am referring to the story of Philippines as Carlos Celdran tells it: https://overchaa.blogspot.com/2012/06/over-chaa-today.html
Ilocos region’s story seemed to me as bifurcated into the nemesis as well as fruition of  the idea of a nation. First the Spaniards and then Ferdinand and Imelda Marcos‘ dream of uniting the 7007 Philippine islands into their idea of a ‘nation’. 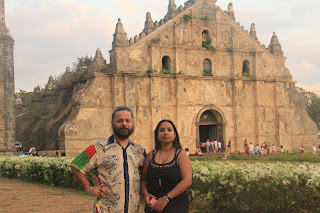 We visited the Baroque churches of Paoay and ones en route Pagudpud with their heavy imposing walls and huge inner conclave. These churches are so big for their small town settings that they appeared fit to host a coronation. Ambitious no doubt! 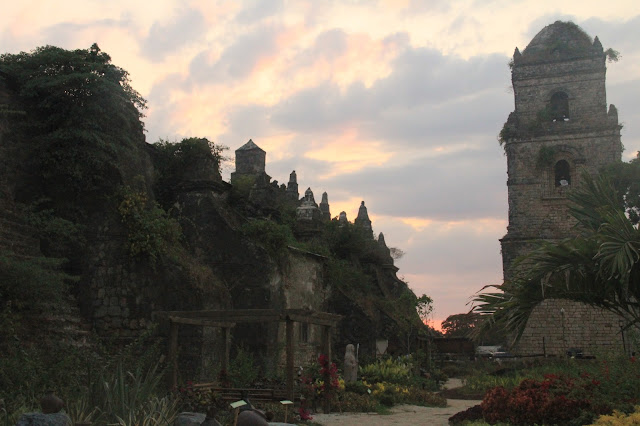 In India,my home country, one gets to see forts and moats this size, not churches). Clearly the Philippines was visualized as a Catholic Nation that would be ruled  through its pews and aisles. 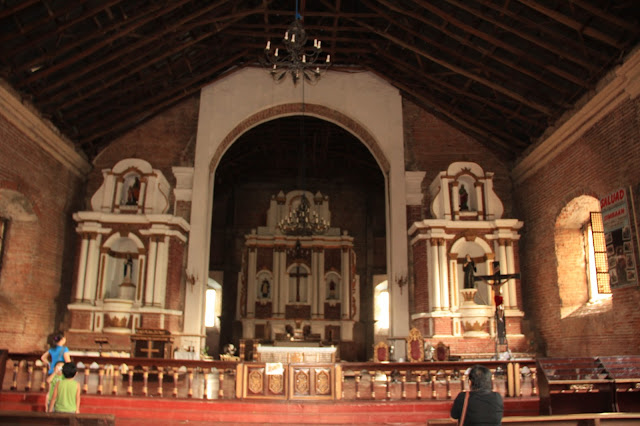 We also glimpsed the relatively recent attempts of the Marcos couple to consolidate the islands into a competitive country.

Marcos’ birthplace, Marcos’ museum, Marcos’ Mausoleum— 470 kms away from the Philippines capital Manila. Manila– radiant and shining and playfully prodigious as compared to Ilocos Norte and Sur– neglected, stuck in time, in some ways pristine though poor, and a tad sad. 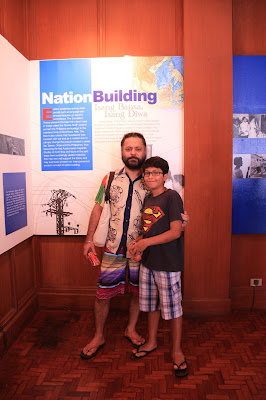 As people entered the mausoleum where photography was not allowed– the solemn walls that held the preserved body of Ferdinand Marcos spoke nothing of the dictator’s Dream.

There was not a remote resemblance of a message, or an objective reality of  what Marcos had tried to achieve. The museum gallery tried to do its little, but what impressed the visitors’ minds was just the litter and neglect of the town and its heritage.

Ferdinand Marcos’s body was so well preserved– he could have stood up and got back to work or wooing. But right outside the four walls, it was as if history had put him there and forgotten all about him. Almost like a revenge.The futility of his dream and over-reaching, of his mistakes and nemesis would be lost to anyone casually visiting.

I would highly recommend (again) Carlos Celdran’s guided tour of Manila city, which he has named after Imelda Marcos: https://www.ourawesomeplanet.com/awesome/2012/03/livin-la-vida-imelda.html