“Michelle Phan, so When (will you be) in Manila?” That was the very first question I asked upon meeting her last week here in Singapore. She gave me a smile, gently shook my hand and said, “Oh, I’d love to! Next year.. I’ll visit Manila next year“.

Most Filipino women who are into makeup & Youtube would definitely be aware who Michelle Phan is. Her online popularity was a mere proof that dreams do come true, — that is if fervidly chased! She sounded extremely excited when she heard of ‘Manila’.  I told her that she has a huge fan base there that majority of the women were eager to know when will she finally include Manila on her US/Asian Tour list.

29th of July 2012. 1315H. That was my call time to have my quirky feet land at Tangs, Vivo City. To meet MICHELLE PHAN, yes, the #1 Youtube Makeup Guru in the flesh. Aside from event coverage I was invited to witness her magical makeup skills as she would be conducting her very first workshop in Singapore called, “Colour Artistry Made Easy by Lancome– with Michelle Phan”, and to swim beyond Michelle Phan’s soar to success. 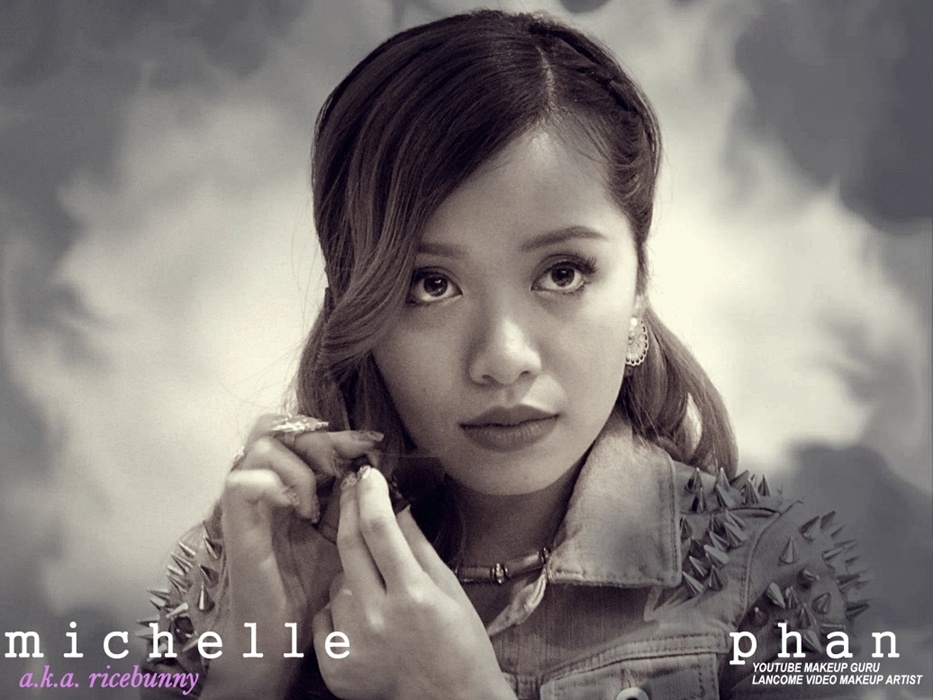 Michelle Marie Phan (a 25 yr.old Vietnamese-American) grew up loving makeup, decided to make videos one fine day, and now is the #1 most subscribed beauty guru on Youtube. She also goes by the alias “ricebunny” eversince she joined Xanga and used the same handle on Twitter. Michelle Phan’s clear, tightly edited and concise makeup tutorials, reviews, how-to’s are definitely what placed her to be well-known amongst all beauty vloggers on Youtube.

The makeup/beauty community seemed to have frozen over the past weekend as Michelle Phan steals every show in town. Michelle Phan hit Singapore shores for the very first time and see below as I caught one of her tweets upon reaching the Lion City: 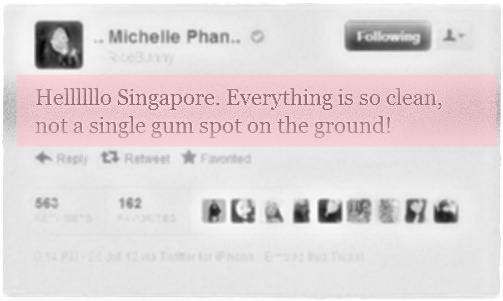 Michelle Phan’s presence and all of these happenings were made possible by Lancome. The luxury brand has been way long popular and well-established even before they acquired Michelle Phan (MP) as their Ambassador or Lancome Video Make-up Artist & Spokesperson, to be exact. 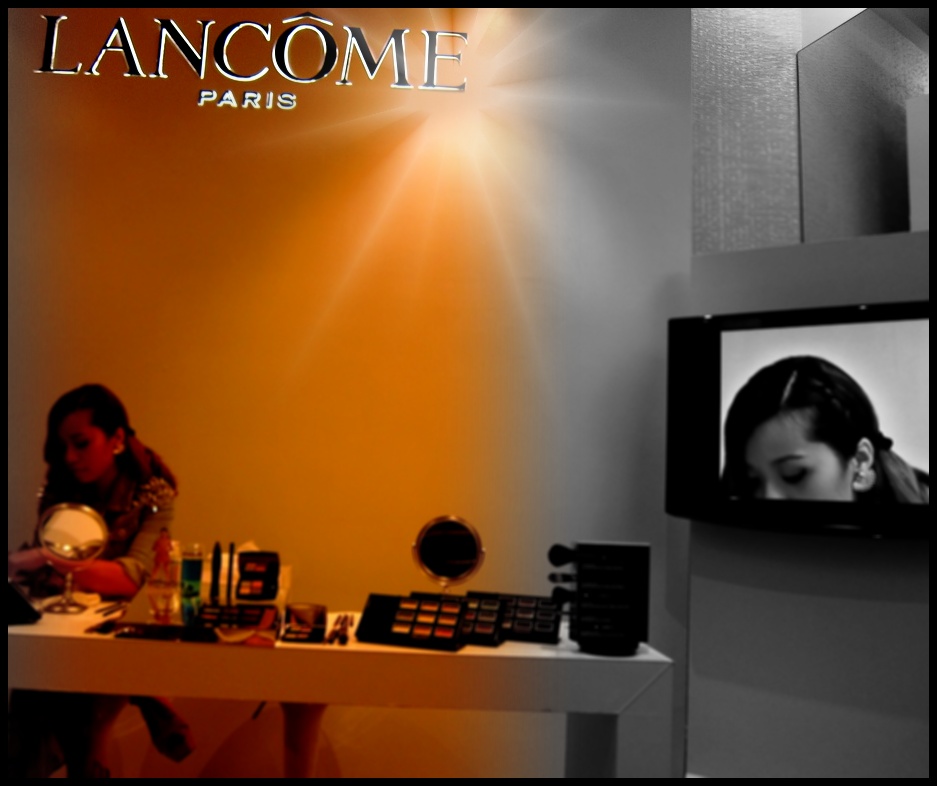 Right now(on a personal note) Michelle Phan doesn’t have any effect on my Lancome buying pattern, I may not be Phan’s biggest fan but I respect her decisions (career move and hard work achievements).

One does not need to become a makeup artist to be smitten by Phan. She’s certainly a beautiful woman and her dedication in delivering high quality videos is simply what paved her own way to success. According to MP she describes her videos as honest, elegant and artistic, which boils down to her channel’s tagline: “Michelle Phan, teaching the art of beauty”.

Say hello to Michelle Phan, YouTube vlogger & Lancome Ambassador! Michelle Phan was wearing an asymmetrical floral print dress, paired with an orange-sherbet peep toe t-strap heels. She shifted to an edgy look of that chic ensemble by wearing a spiked denim jacket (in which I also recall Demi Lovato was paparazi’d wearing).

Time Management, only two words but a tough nut to crack. I was impressed how Lancome & Tangs managed this workshop so well.  They made sure everything was polished as the previous Meet & Greet at Sephora iON was a shocker, as Michelle herself said that the crowd response was too overwhelming. The people queuing outside were allowed to enter the venue on time and you can see their gleaming faces upon the sight of Michelle Phan. It’s like they’re opening that deluxe gift box from Tiffany & Co.! 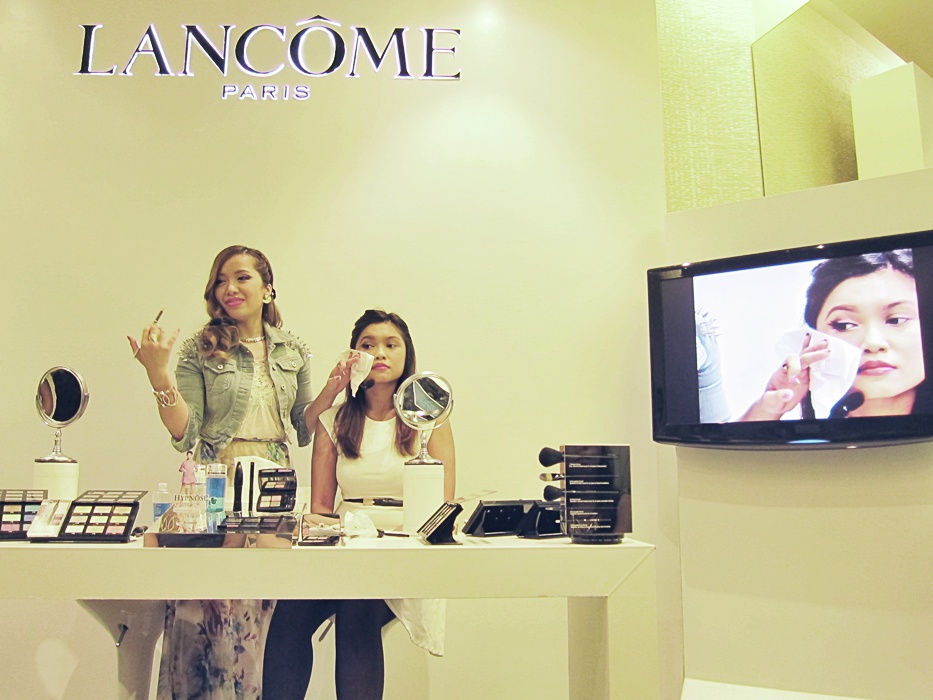 Michelle Phan rolled out her Masterclass with such poise and ease. It was an in-depth color artistry makeup workshop she efficiently executed, also featured were Lancôme’s newest eye makeup products. It’s mainly focused on how to achieve your very own Eye Colour Statement...in this case, the Dolly Eyes.

Michelle Phan kept on raving about the Plume Liner, if you really want to achieve the dolly eyes without a sweat, this is one brilliant weapon for that grandeur lashes you have ever wanted. Also not forgetting the Hypnôse Doll Waterproof Mascara to seal the look in. 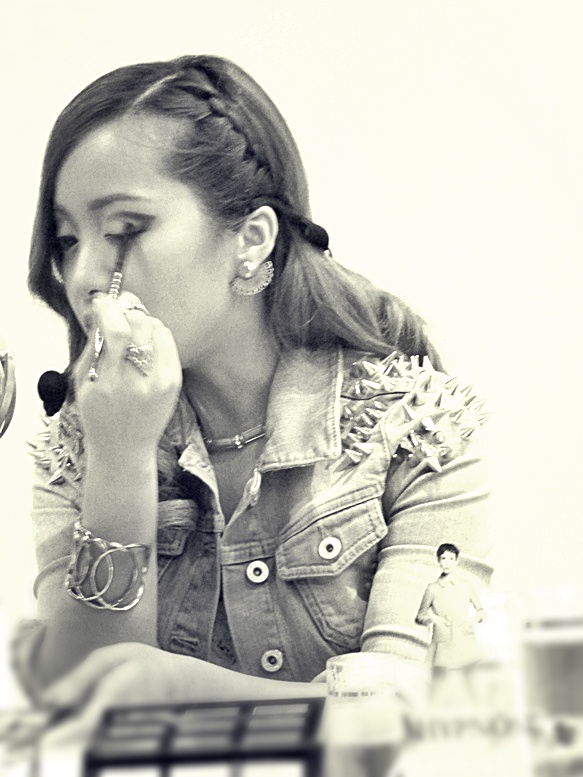 During the class, a few Q’s were thrown to Phan in which the makeup maestro gave some knockout answers. It was an impromptu but modest challenge she accepted, I guess?

What do you think of Singaporean Makeup?

MP: “I noticed that it’s fresh, simple and lots of eyeliner!”

What’s your beauty secret that makes you glowing & confident?

MP: “Strong lip colour! Bold, vampy or dark red lipstick! It’s a great way to add this attitude to your face and it makes your skin so much brighter!”

How do you manage your time?

MP: “OMG, I am the worst when it comes to managing my time. I even got an assistant last year, who literally lays out everything for me: Take your vitamins, eat your breakfast, check your email. But seriously, just use your phone and list everything you need to do. Set an alert and once it does, just DO IT! Take a break as well. Take time to sit down, rest and that means, not getting online. Take a deep breath and relax! Life is too short, don’t overwork!” 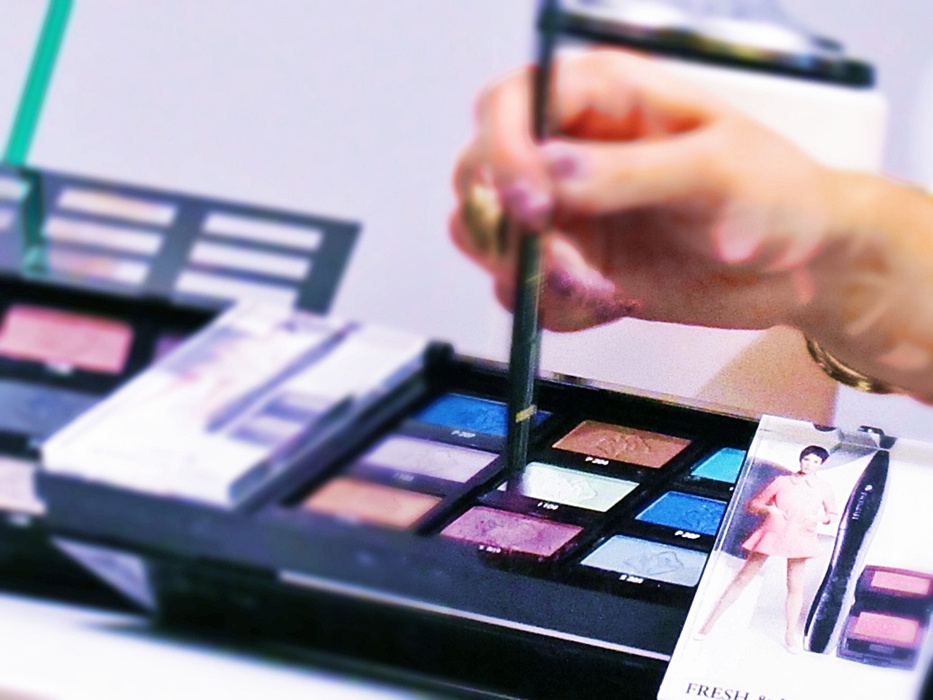 Eyeliner: Apply liquid eyeliner outside in for a cat-eye shape. Eyeliner tends to run thicker at first so applying it outside in gives a line that’s thicker at the outer corner and thinner at the inner corner, acquiring that elongated eyes! Michelle Phan says she prefers matte liners so as to avoid that odd/shiny reflects especially at night.

Take a paper towel or tissue, fold it in half, and hold it under your eye while applying shadow/liner! 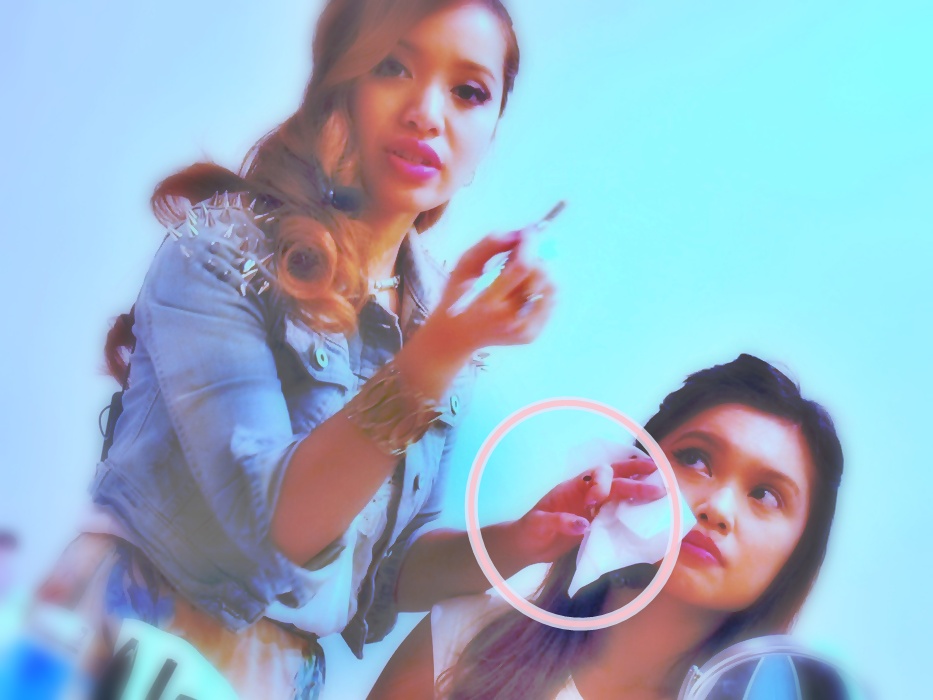 And the most intriguing Q of the day?

What to do with uneven eyes?

Michelle Phan made a confession of her DIY method on how to have Double Eyelids without any form of Surgery. Ladies with monolids, listen up for her revealed beauty secret tip!

You can shower, sleep, pet your dog, sip on your Starbucks cup but do not remove the tape, if you can wear it 24/7, by all means do so. It will stay and create double eyelids.

During the course, Michelle Phan somehow tends to be discursive, in which she is indeed aware of. I find her amusing as she appeared to be popping imaginary bubbles with her fingers.  In which afterwards she’ll mumble, “It makes sense to my head, I swear”.. then rolls her puppy eyes in the cutest way possible. 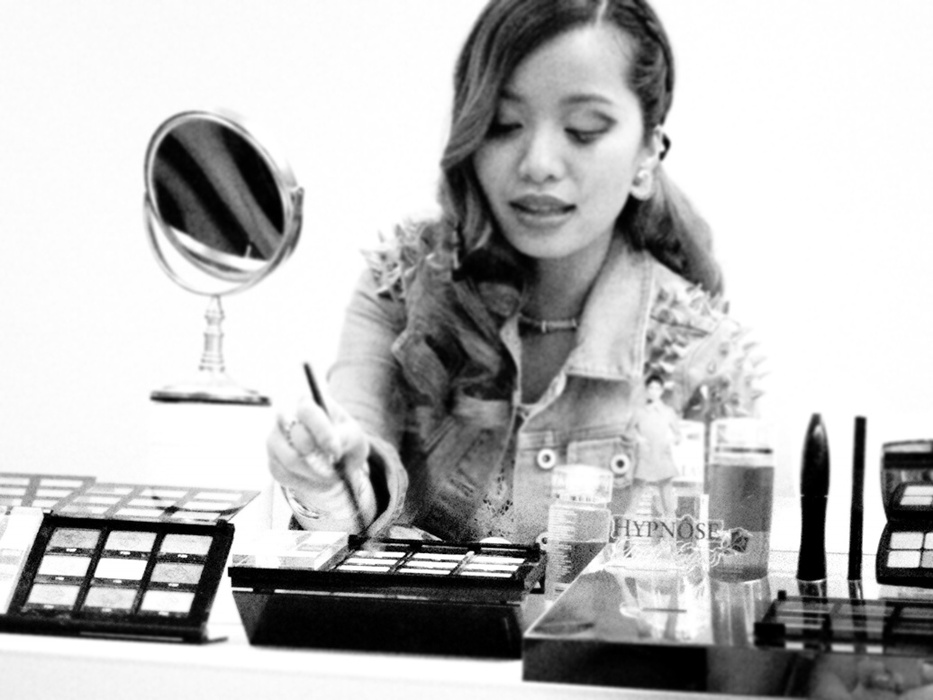 What resonates more in Michelle Phan’s graceful skills is her bubbly and humble persona. She definitely is equipped with the nitty-gritty of the makeup/beauty world that it’s somehow impossible not to love her. 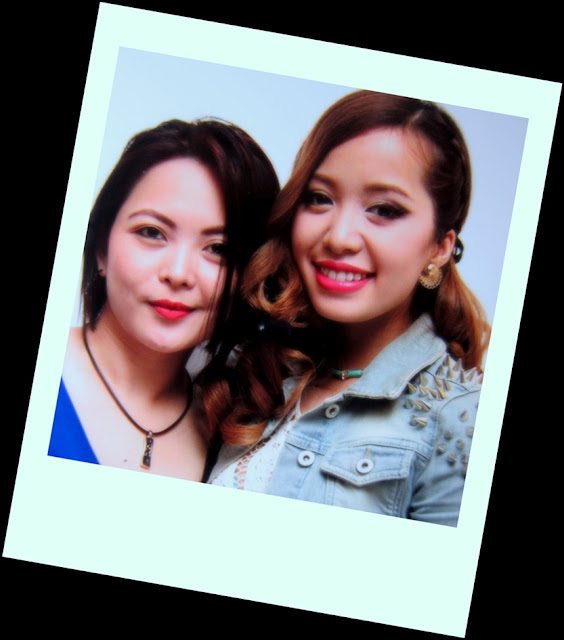 With almost 2 million subscribers, half a billion page views, and a Lancome deal under her belt? Michelle Phan is like every woman’s fairy godmother, gnawing into each and every woman’s subconscious mind on how to be beautiful inside & out. 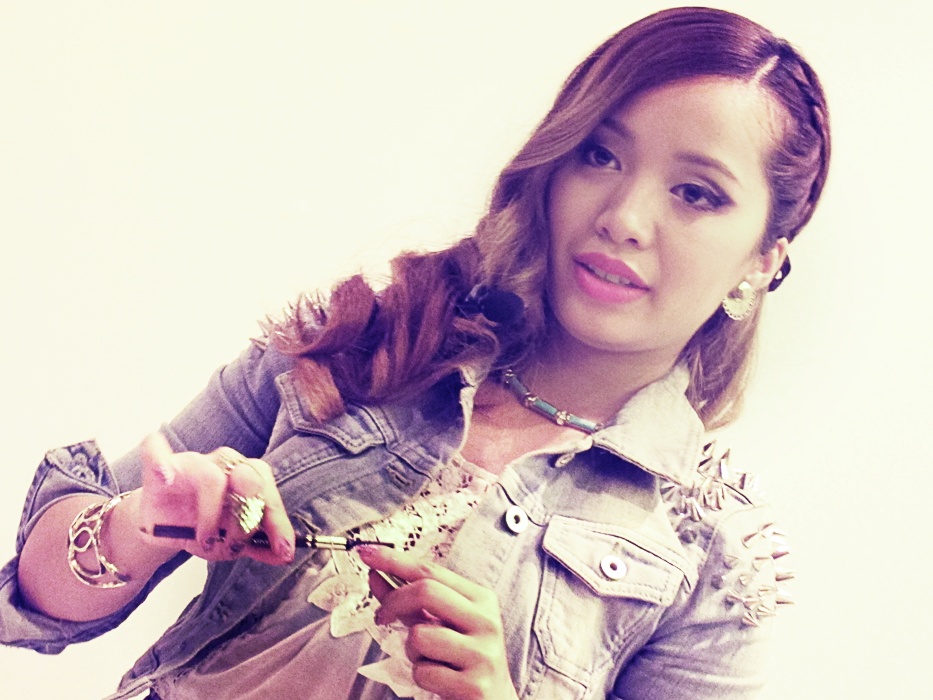 Michelle Phan got talent and her own distinctive style, her craft earns her a kind of respect ain’t achievable overnight. She is clearly very good at what she does. She got the charm, the heart and the humour. Lancome was the first brand to sign a social media guru to its roster and as the partnership unfolds and continue to soar, there’s plenty to drink in.

Lancome has also came up with a Limited Edition set inspired by the guru herself. 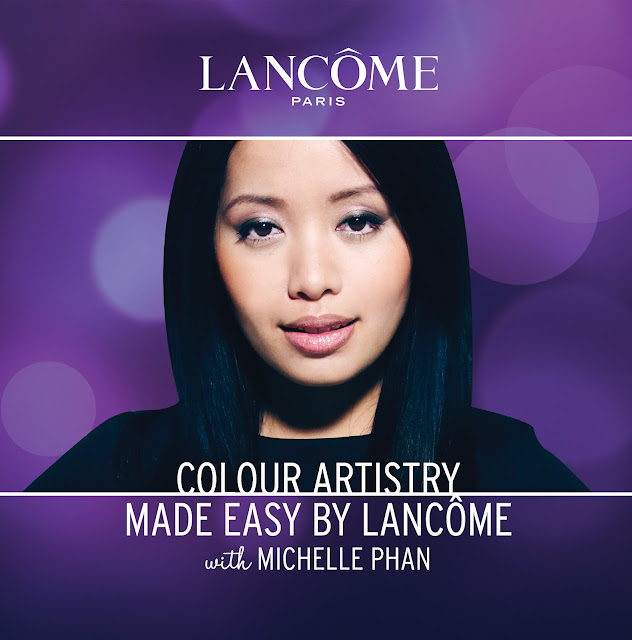 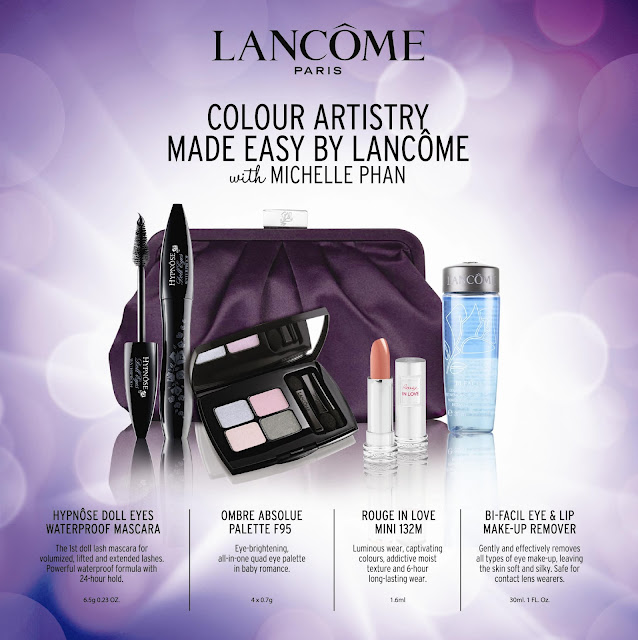 Products to check out! 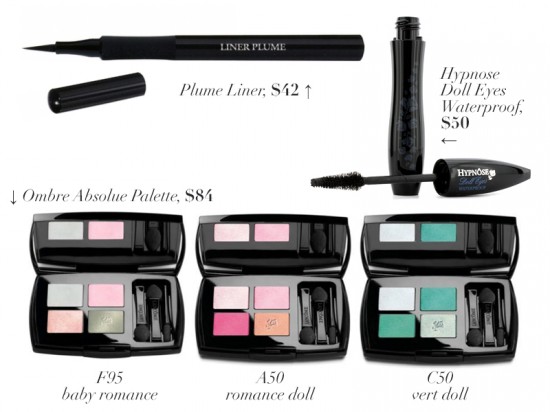 Plume Liner, S$42
Extremely long lasting eyeliner which glides on comfortably with a jet-black finish. Thanks to a long and soft brush, it can easily draw thin or thick lines. 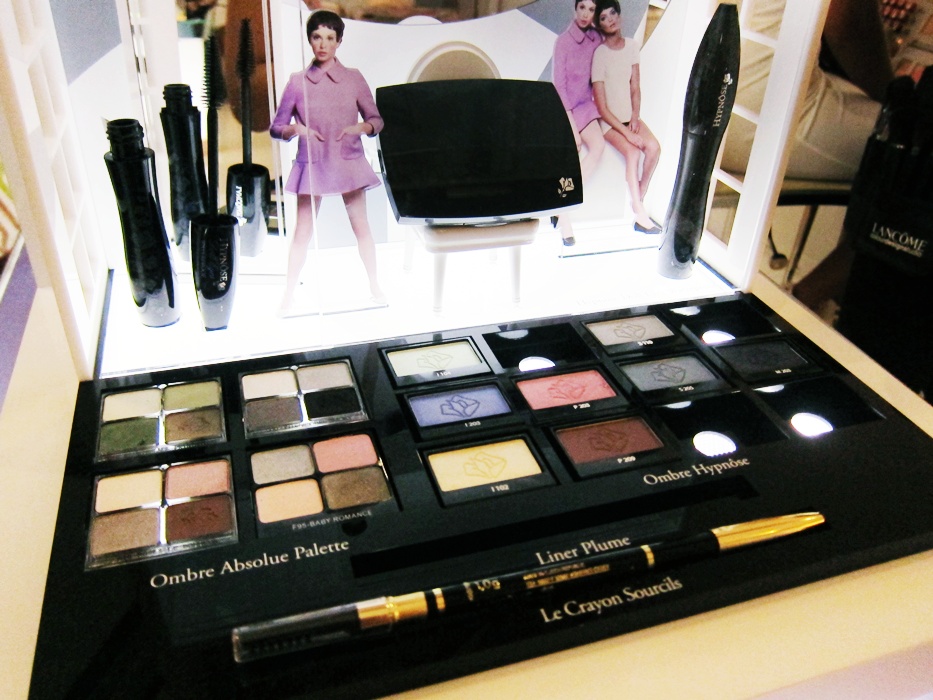 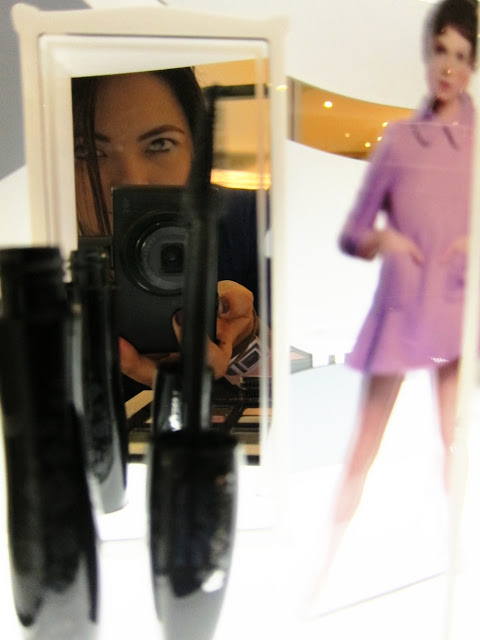 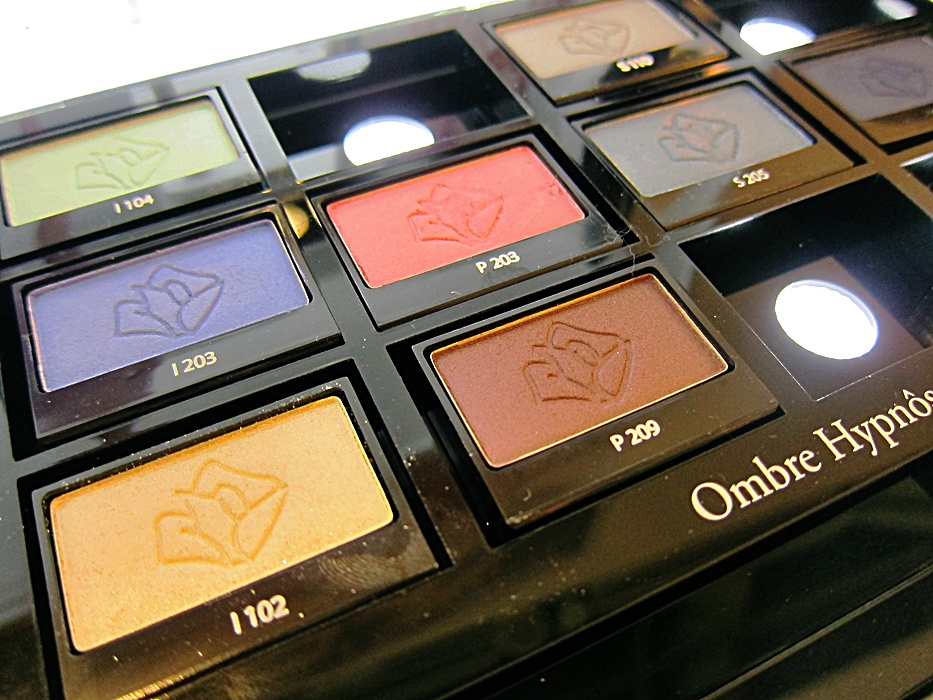 Calligraphy Workshop by The Fozzy Book