There are a lot of things that hold Filipinos together–food in handaans, balikbayan boxes, the newest chismis in your neighborhood, etc. Our feelings of nationalism, however, goes beyond our intricate bond with our culture. It extends to the most intimate recesses of our hearts, the most personal yet most public aspects of our lives. Filipinos truly believe that they are close with each other for they have this one thing in common–religion.

There are two main religions that can be found here in the Philippines–Christianity and Islam. However, they are not distributed equally in the country. Most of the Filipino population is Christian, in the barest definition that being a Christian is characterized by acknowledging the existence of God. Most Muslims reside in Mindanao, although some are starting to move North. Both religions offer something that appeals to our family-centered nature of being Filipinos–the Church of Christ in Christianity and Ummah in Islam. Both refer to the collection of believers all over the world and the ultimate parts of these believers in the ‘family’ of God.

To enter that family is an amazing experience for many. To leave it is nothing short of traumatic.

I grew up in a very Christian household. We weren’t Catholics, no. We were Protestant Christians who were very dedicated to God. Both of my parents were church leaders. Perhaps this incredible enthusiasm is a mark of Protestantism in Filipino Christians, I wouldn’t know.

However, in my experience as a Christian in my church for 15 years, it was the only reality I’d ever known. I started doubting everything in Sunday School and fellowship meetings. I began asking questions that I would then fend off for three whole years. In my mind, the only thing that I knew was, “I couldn’t be not a Christian.”

I won’t share what eventually convinced me to leave the religion behind, for I believe that every self-proclaiming atheist (or agnostic) has their own unique reason. If there is something that I can share, however, that I think could be of assistance to those who are in the ‘mind-closet’ yet, it would be my experiences as an atheist and how I dealt with those experiences.

As atheists, we deal with a lot of things that a lot of people don’t. First off, you will have to deal with a lot of pain. I was once called a demon by my own mother when I confessed to them my lack of belief in God (She was convinced that I was possessed and attempted to exorcise me). You will also constantly fear the possibility of being disowned by your family if they ever found out your religious inclination. For everything Christians say about ‘loving thy neighbor,’ a lot of them aren’t very good at practicing it with someone who doesn’t line up with their belief system.

Your friends will try to convert you and you will feel ostracized whenever they talk about God. If you want to know what it’s like to be in the spotlight and in the back seat in the same conversation, then I can say that this is something that happens a lot in my experiences as an atheist. You will be stuck in a limbo between being who you are and being the person who won’t cause their loved ones pain just because they can’t keep their secrets to themselves. It’s a lot like being a part of the LGBT community but the conditions are a lot worse (Disclaimer: I’m gay as well, so…). Your community is small (and quite frankly limited to the Internet) and your chance of being accepted in the family is minuscule to non-existent.

Second, you will have to deal with a lot of misconceptions. People will criticize you for worshipping Satan or the demon or some other deity you know you don’t revere. They will tell you that it is impossible to live without God and that you are bound to live a worthless, hedonistic, crime-filled life. In the Philippines, it is worse to be a kind non-believer than it is to be a cruel believer. Because of the lack of people’s understanding of the matter, you will often have to suffer the annoyance of being labeled wrong.

What many fail to understand is that the non-believer crew isn’t really composed only of atheists and agnostics. In fact, it’s a lucky day for most of us to find someone who can even name the two and be able to differentiate them. In my non-believer friendship circle, there are deists, pantheists, agnostics, and atheists. Deists believe in a higher power who does not interfere with creation. Pantheists believe that this higher power is the universe itself. Agnostics aren’t sure if there is a god or not. Atheists, on the other hand, believe that there is no god at all. 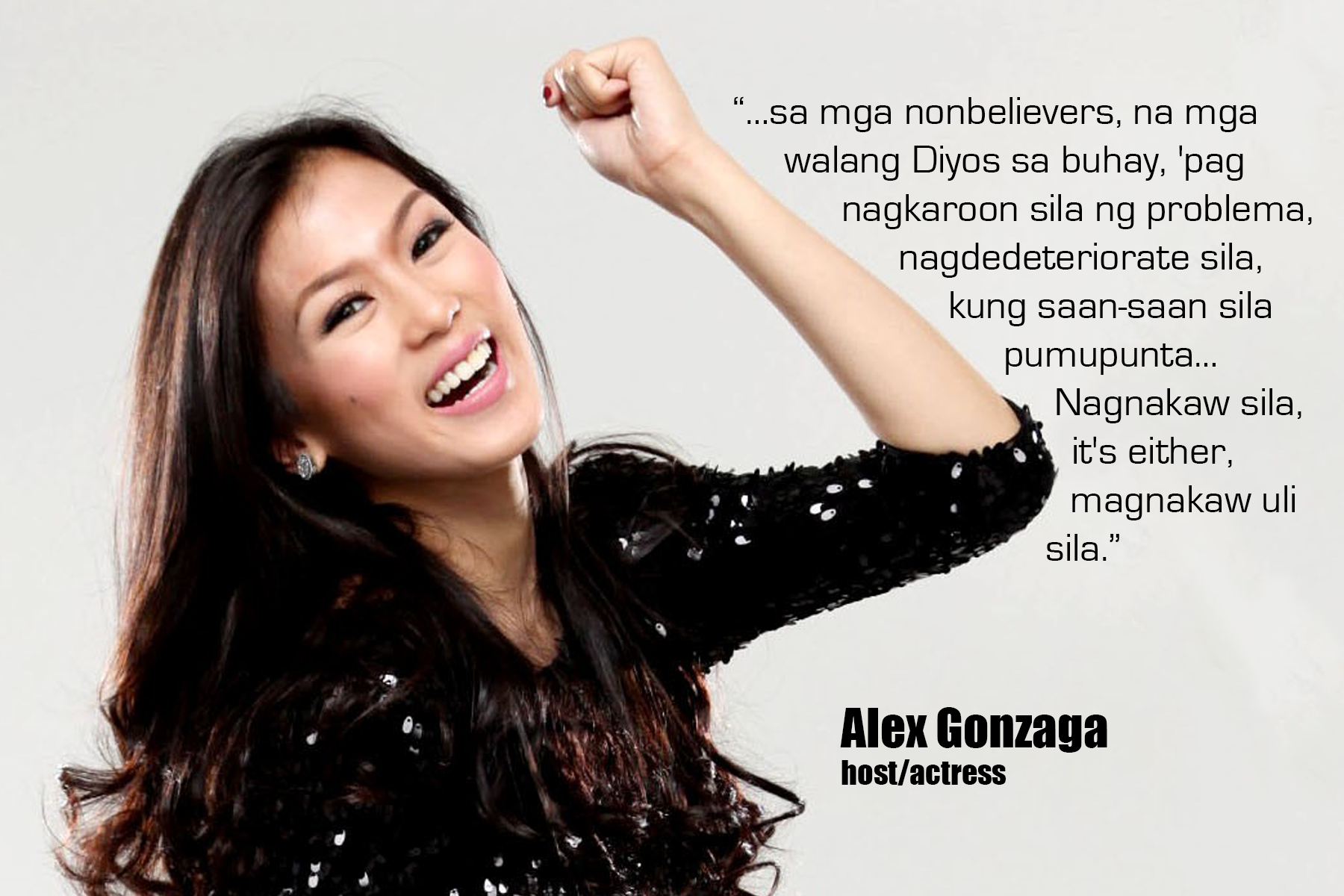 Lastly, being a Filipino non-believer can, to some degree, offer you a sense of euphoric freedom. Freedom from what exactly? Well, freedom from unfair moral expectations. In my experience, it became easier for me to pursue my personal passions. It allowed me to feel that I am being kind not because I am subconsciously hoping for a reward in the afterlife but because it is my purpose as a person. In fact, atheism has taught me how to see the world in all its beauty for I live believing that I would have no more chances to appreciate everything after I die.

I no longer fear my grandmother’s creepy stories of hell and demons, of the supernatural nuno sa punsos and tikbalangs. I also no longer feel that I am being limited. I can learn, read, and watch whatever I want without feeling so guilty about God catching me in the act. Activities that were once taboo to me because of their sinful nature (e.g. sex, alcohol, etc.) are now activities that I gladly take part in.

Now, one may argue that these activities are normal, even for non-Christians. However, you have to consider that I came from a deeply religious household. Doing these ‘normal’ things was a heavy burden on my soul at the time.

"So many gods, so many creeds, so many paths that wind and wind while just the art of being kind is all the sad world needs." – Ella Wheeler Wilcox?-AdrianD

Posted by Atheism in the Philippines on Sunday, January 21, 2018

I learned a lot of things from being a Christian, though. I thank my parents for molding me in such a way that kindness has become engraved in my personality. I still remember the Bible verses that had kept me going in my times of distress. However, times have changed. That was then, and this is now. Now, I am content with being myself and keeping the values I’ve learned from Christianity. Regaining faith is another matter entirely. Who knows? Maybe someday. All I know is that at this moment in time, I am a Filipino atheist and that these are my experiences.

Do you have any experiences you’d like to share with our audience? Drop your stories below. We’d love to expand the community.

LOOK: This Cutie Dressed Up as Captain Barbell to...